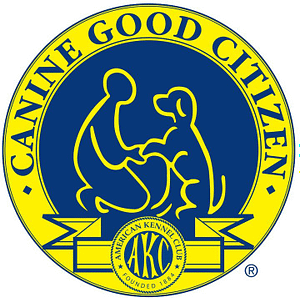 Appearance and grooming. The dog must appear healthy and well-groomed to pass the test. The evaluator will visually assess the dog, then use a brush provided by the handler to gently groom the dog, check both ears, and pick up both front feet. The dog doesn’t need to hold a specific position during this test item, but does need to cooperate with the evaluation.

Out for a walk. The evaluator observes the dog and handler demonstrate loose-leash walking, with at least one left turn, right turn, about turn, and stop. The dog does not need to be perfectly aligned with its handler, but it must be apparent that the dog is attentive to the handler’s’ cues.

Walking through a crowd. This is similar to the prior test item. The dog and handler must demonstrate loose-leash walking through a group of pedestrian traffic (a group of 3+ people). The dog is allowed to show some interest in the strangers but needs to stay attentive to its owner, without straining at the leash or jumping up.

Sit & down on command and staying in place. To demonstrate the dog’s training, the handler cues the dog to sit and down. The owner then cues the dog to stay in place (either in a sit or a down — handler’s choice) then walks to the end of a 20′ leash, turns around, and comes back. The dog must stay in place until released by the handler, though it does not need to hold the sit/down. Multiple cues are allowed.

Come when called. In this test, the handler leaves the dog and walks 10′ away, then calls it. The handler can encourage the dog towards to come by using verbal cues, crouching down, patting their legs, etc.

Reaction to another dog. This is one of the hardest tests for students to master! Here’s the exact description from the AKC website: “This test demonstrates that the dog can behave politely around other dogs. Two handlers and their dogs approach each other from a distance of about 20 feet, stop, shake hands and exchange pleasantries, and continue on for about 10 feet. The dogs should show no more than casual interest in each other. Neither dog should go to the other dog or its handler.”

Reaction to distraction. The evaluator will pick a couple of random distractions and observe the dog’s reaction. Distractions can be anything the evaluator deems appropriate, such as dropping a book, knocking over a chair, a jogger running past the dog, or opening an umbrella. The dog may show interest in the distraction but should not bark, panic, or try to escape the situation.

Supervised separation. The evaluator takes the dog’s leash, and the owner goes out-of-sight for three minutes. This is another challenging test element. The dog does not have to hold a specific position, but may not panic, bark or whine continuously, or show excessive nervousness. The evaluator is allowed to speak to the dog but cannot pet the dog or excessively comfort it.

The handler is allowed to talk to the dog during all of the test exercises, except for supervised separation as the handler is not present. Food or treats, clickers, toys, and corrective collars are not allowed to be used during the test. A dog that growls, snaps, or bites (directed towards another dog or a human) at any time will be dismissed from the test.

In Monday’s blog post, I will discuss how to prepare for the test, as well as the new higher-level tests in the Canine Good Citizen program.