What Makes a Great Training Treat? 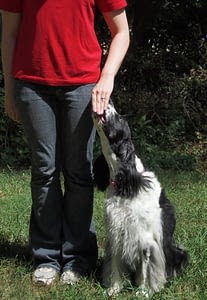 Be sure to pick a training treat that your dog enjoys!

At last, here is my written answer to the number one question I receive from owners learning to use clicker training with their dogs… what makes a great training treat? Here are the things I tell my clients to consider when choosing treats to use while training their dogs.

You will be using a lot of treats when training your dog. In order to avoid weight gain, cut your treats into the tiniest pieces possible. My rule of thumb is that treats should be no larger than the size of a pea; for itty-bitty dogs, the treats should be half that size. I can tell you that there is no commercial dog training treat on the market that I have found that is small enough for training. I buy the usual “training treats” like Zuke’s and soft Tricky Trainers from Cloud Star and break them in half. Any soft treat can be cut into smaller pieces.

As a general rule, I do not use crunchy treats when training my dogs, and I suggest that my students avoid them too. Crunchy treats make a mess and encourage your dog to sniff the floor and hunt for crumbs, taking their attention from you. Dog biscuits are okay as an occasional snack, but leave them out of your organized training sessions. Soft treats are much easier and faster for dogs to chew.

Every once in a blue moon, I do encounter a dog that strongly prefers crunchy treats to soft ones! For those dogs, biscuits made for “small breed” dogs and freeze-dried treats tend to work quite […]

The Power of Peanut Butter

Behold! One of the most versatile dog training tools known to man. (Photo Credit: Victoria Chilinski)

What’s your favorite training tool? Dog trainers are always looking for the latest and greatest items to add to their bag of tricks. My answer can be found at any supermarket or convenience store: peanut butter!

My passion for peanut butter began while attending agility classes with Tessie. She is a whiner, and would anxiously await her next turn on the equipment by making all sorts of strange noises. Springers are capable of making some pretty bizarre sounds and Tessie is no exception. (We call her the canine tea kettle.) A PB-stuffed Kong kept her quiet and relaxed while waiting in her crate.

Later in her agility career, I discovered that Clean Run sells refillable squeeze tubes. By filling one with peanut butter, I could keep Tessie’s focus ringside. This was something I struggled with because Tessie doesn’t enjoy tugging away from home. (Canned dog food works really well in squeeze tubes, too!)

My next great peanut butter discovery came while working with our puppy Finch. He is reactive towards people and other dogs. Finch strongly prefers playing with toys over eating treats, especially outdoors, which is where he sees his triggers. PB was the answer. It was valuable enough to him that he would take it while working outside. I also use crunchy peanut butter to disguise his pills — the broken pill pieces blend right in with the nut chunks!

I think that there is more to this than enjoying a tasty snack, though. My theory is that the act of licking is calming to […]