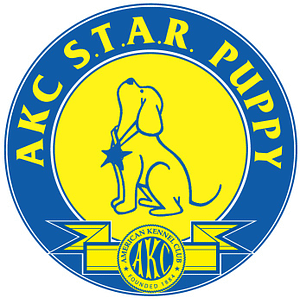 Are you ready to commit to the training and socialization your puppy deserves?

Join our AKC STAR Puppy Challenge! Any puppy under 1 year of age can participate. Read more about the test here.

The STAR Puppy test makes a fabulous training goal for new puppy owners. It will set you & your puppy up for a lifetime of teamwork, solid communication, & fun! By meeting the criteria for the test, you’ll provide your puppy with a foundation of basic manners and age-appropriate socialization.

Preparing for the test will expose your puppy to many situations he’ll need to be comfortable with for the rest of his life. The test includes scenarios like grooming, being handled by strangers, wearing a collar or harness, going for walks, and more.

This test is a great first step toward the Canine Good Citizen program, trick dog testing, or dog sport competitions – but it’s also a great way to make sure you’re being an active participant in your puppy’s education.

So, we’re challenging you to commit to taking the test with your puppy. To be eligible for the STAR Puppy test, you must attend at least 6 manners classes with your puppy. Our goal is to test at least 25 puppies in 2018. Will your puppy be one of them?

Puppies are eligible to take the STAR Puppy test after attending six manners classes with their owners, and the test is free as part of your Flex Class Pass.  You can take the test after class on Mondays, Tuesdays, and Wednesdays. We’ll also be adding special “STAR Puppy Testing Events” to our group class calendar, too.

Trick training grows your bond with your dog and builds your training and communication skills. It’s a great way to burn off some of your dog’s energy when it’s too hot or rainy to play outside. Plus, it’s a ton of fun!

The American Kennel Club recently added a Trick Dog program to their catalog of events, which means your dog can earn official AKC titles for passing four different levels of tests.

For all of these reasons, we’re always trying to find ways to encourage our students to spend some time teaching tricks. So, we’re doing something brand new: a Summer Trick Training Challenge!

From now through August 31st, any dog who is signed up for one of our Intro to Dog Tricks classes will be added to this board in our lobby…

This board will keep track of everyone’s progress through the Novice and some Intermediate level tricks! For each trick you complete, we’ll place a sticker in the corresponding box on the board.

END_OF_DOCUMENT_TOKEN_TO_BE_REPLACED

Are you a responsible puppy owner? The American Kennel Club’s STAR Puppy program is designed to reward owners who take their puppies to training classes. “STAR” is an acronym for the four critical parts of puppy raising: Socialization, Training, Activity, and Responsibility.

The AKC recognizes that well-trained puppies make better companions and are less likely to be relinquished to shelters. In fact, behavior problems are the #1 reason for giving up a dog to a rescue. The STAR Puppy program is an incentive program for responsible puppy ownership. Working towards this goal will give you and your puppy a head start toward a lifetime of great behavior.

In order to be eligible for testing, puppies need to attend at least 6 group dog training classes with their owner. The program is open to all puppies up to one year of age, regardless of breed or mix.

Once your puppy has attended at least 6 classes with us, we can test your puppy immediately after any of our Flex Classes. It doesn’t take long, and many of the test items can be observed during class time.

The STAR Puppy test consists of “20 Steps to Success,” a total of 20 test items. The first six are owner behaviors, and the other 14 are puppy behaviors. The items are:

Loose leash walking is one of the most important skills to master before taking the CGC test, because it is a part of several test items.

In last week’s blog post, An Overview of the AKC Canine Good Citizen (CGC) Test, I described the ten elements of the CGC test. Preparing for this test is key. There are a few specific behaviors that not all “well behaved” dogs know.

Preparing for the CGC Test

The CGC test is designed to reward well-mannered dogs and their owners. The first step towards a well-mannered pet is training. What people consider “polite behavior” does not come naturally to dogs. Sitting politely for greeting, walking on a loose leash, and coming when called are skills that need to be trained step-by-step. A basic obedience class should build the foundation for many of the skills necessary to pass the test.

Some trainers offer group classes specifically geared towards the Canine Good Citizen test. These classes are typically taught by CGC evaluators who will be able to find the weaknesses in your dog’s training and help you overcome them. Practicing the test items each week will also increase your familiarity with the rules, making test day as stress-free as possible. We cover the Canine Good Citizen skills in our Advanced Dog Manners group class.

It’s not impossible to train your dog by yourself to pass the CGC test. If you decide to go that route, study the test items carefully and be sure to practice in public places, such as dog-friendly parks and pet stores, so your dog gets used to performing around the distractions that will […]

Appearance and grooming. The dog must appear healthy and well-groomed to pass the test. The evaluator will […]